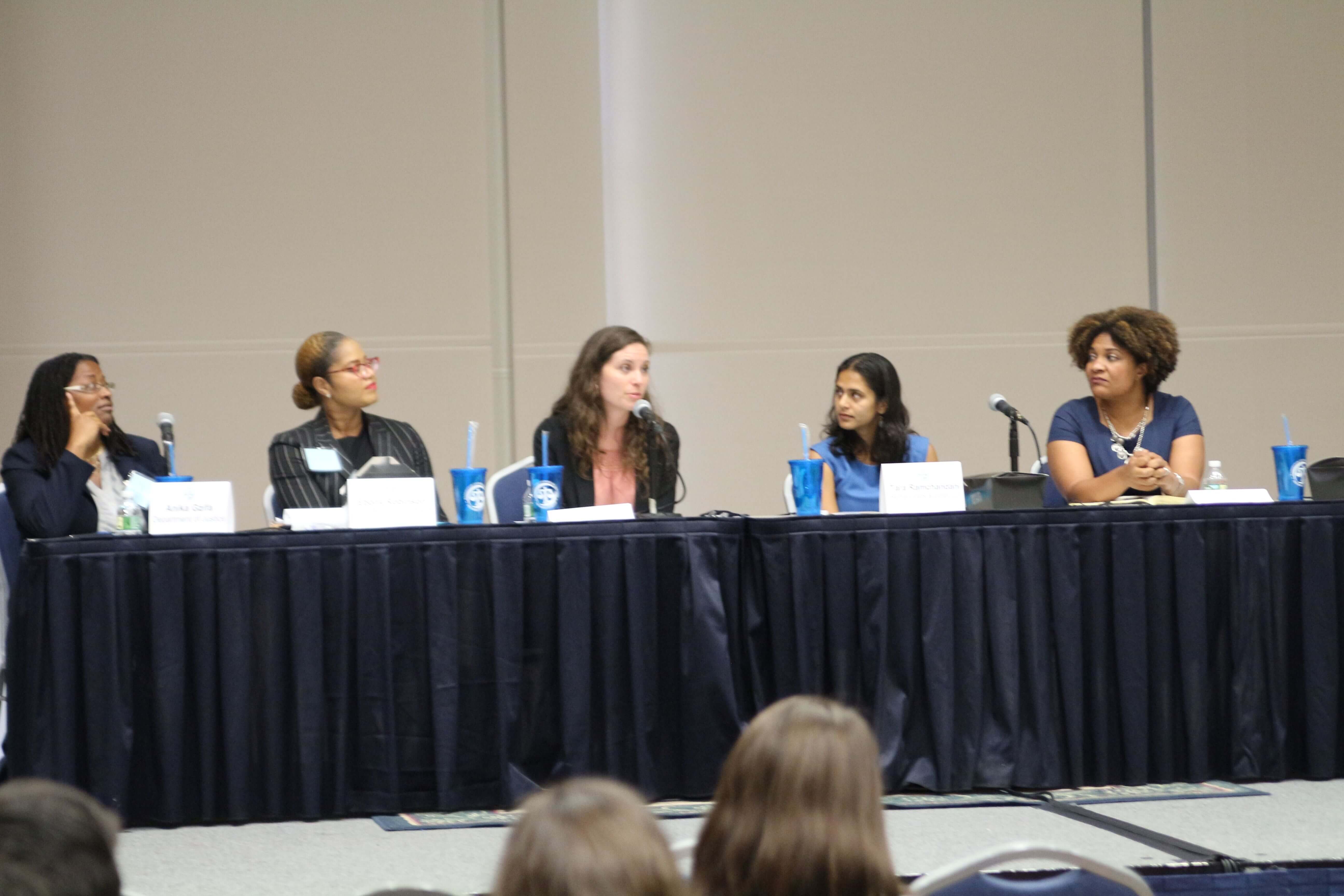 In today’s political climate, it is vital for individuals to have access to legal advice in order to protect their basic civil rights and civil liberties. This year at the Summer Pro Bono & Public Interest Forum, we’ll discuss how to think creatively and devise alternative ways to achieve the goals of a civil rights lawyer and protect those rights.

Brandy Wagstaff is currently serving as Legal Counsel for Litigation in the Criminal Section’s Human Trafficking Prosecution Unit (HTPU) at the U.S. Department of Justice, Civil Rights Division. In this capacity, she provides legal and strategic analysis in support of HTPU-led enforcement activities and initiatives. Prior to joining the HTPU, Brandy served as an Attorney with the Civil Rights Division’s Disability Rights Section, where she engaged in litigation and developed regulations to enforce the Americans with Disabilities Act. Brandy is also an adjunct professor who teaches courses in legal writing, appellate advocacy, and disability law at George Mason University School of Law (GMU). She previously served as a judicial clerk to the Honorable Alan Kay on the U.S. District Court for the District of Columbia.

Sasha is a Staff Attorney at Lambda Legal working in their new Washington D.C. office. Before joining Lambda Legal, Sasha served as Staff Attorney and Policy Counsel at Transgender Law Center where she engaged in litigation and policy advocacy that was focused on helping transgender and gender-nonconforming people find meaningful employment, obtain competent health care coverage and secure accurate identity documents. Before joining Transgender Law Center, Sasha worked for Basic Rights Oregon, the largest LGBT rights advocacy organization in the state. Sasha was the first openly transgender person to be appointed to an Oregon state board, and from 2012-13, she served as the chair of the Oregon State Hospital Advisory Board.

Kelly is a leader of Wilmer Hale’s Administrative Law Group and focuses his practice on government and regulatory litigation, administrative rulemakings, and appellate matters. Kelly also has a robust pro bono practice. He successfully represented Norman Brown, a prisoner sentenced to life in prison without the possibility of parole for drug crimes in his early 20s, in his clemency efforts. President Obama commuted Mr. Brown’s sentence after more than 20 years in prison. He currently represents an inmate serving a more than 40-year sentence in seeking sentence modification; seven public health organization and individual pediatricians in suing the FDA under the Administrative Procedure Act; and the D.C. public charter schools in litigation relating to equal funding requirements under the School Reform Act.

Jonathan became Executive Director of the Washington Lawyers’ Committee for Civil Rights and Urban Affairs on July 1, 2016. Immediately prior to joining the Committee, Jonathan was the Associate Dean of Experiential and Clinical Programs at the University of the District of Columbia David A. Clarke School of Law. Previously, Jonathan served as the Chief of the Special Litigation Section of the Civil Rights Division of the United States Department of Justice. Jonathan has an extensive career in civil legal services prior to his government services. He was Executive Director of the Legal Aid Society of the District of Columbia, the Public Justice Center in Baltimore, Maryland, and the D.C. Prisoners’ Legal Services Project.

In April of 2002, Hassan founded Tycko & Zavareei LLP with his partner, Jonathan Tycko.  Prior to joining the firm, Hassan was in the Washington, D.C. office of Gibson, Dunn & Crutcher LLP. Although he is a general litigator, Hassan devotes most of his practice to class action litigation. While at Gibson Dunn, Hassan managed the defense of a nationwide class action brought against a major insurance carrier. In recent years, Hassan’s class action practice has focused on the representation of plaintiffs in consumer fraud cases, primarily relating to the financial services industry. In his civil rights practice, Hassan has represented individuals, groups of employees, and tenant associations in employment and fair housing litigation.

Hear these panelists, along with keynote remarks by ACLU Legal Director David Cole, at the Summer Forum on Wednesday, June 13, from noon to 2:30 at Georgetown Law.

Christina Jackson is the Deputy Director of Washington Council of Lawyers.